Both of Ron’s parents were from families of early settlers in the Blackburn and Doncaster regions of eastern Melbourne. They were orchardists and market gardeners well before 1906, specialising in orchard crops such as apples, pears, peaches, apricots, lemons, cherries and nectarines.

He was invited into the family orchard business but Ron had different ideas. In 1953, the Government acquired 21 acres of the orchard for the Blackburn High School. After a few years, Ron sold 17 acres for the ‘Old Orchard Shopping Centre’ now known as Blackburn North.

Tennis formed part of Ron’s life. He was a Foundation Member of the Koonung Park Tennis Club of which he spent several terms as President and was awarded a Life Membership.

Ron began growing orchids in the early 1930’s with some plants that he bought from Jack Bissett in Sydney. He progressed with various species which he grew very well as they became available.

Ron joined the Victorian Orchid Club (VOC) in the mid 1930’s. He became an accredited orchid judge and he attended several World Orchid Conferences, beginning with the Medellin in Columbia, South America, in 1974. He was also a regular visitor over many years to Fiji.

Ron joined The Australian Orchid Foundation (AOF) in 1978. He supported the work and ideals of the Foundation and was a regular donor. In 1983, Ron joined Gerald McCraith and Cliff Grosvenor in a feasibility study of the recently acquired Disa uniflora from South Africa. This was an extremely beautiful and rare orchid in Australian at that time.

Various trials were carried out over the following 18 months. Ron’s technique of creating small flasks of Disa was an immediate success which provided an immediate and beneficial boost to the funds of the AOF. In a comparatively short space of time, the uptake of Disa orchids in southern Australia was growing at a faster rate than any of the team anticipated.

Ron’s orchid collection was an interesting one; he had a “bit of this and a bit of that”, not always compatible, but he was most successful in breeding from the most unusual species.

Ron was always a student. He learnt Spanish, Indonesian and a little Japanese and was in the beginning stages of Mandarin Chinese. Among other things he did a course in electronics and more recently he was learning to solve problems with computers.

Ron was an unassuming person; he had a dry sense of humour and was delighted when a grower sought his advice on some problem the grower was experiencing. Ron had a practical sense in explaining the remedy for the aches and pain from which plant life suffer.

VALE Ronald Pearce… You will be remembered 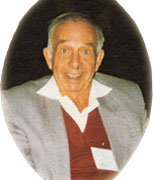