Walter (Wal) Upton lived his 90 years to the full. Born at Dymchurch in Kent, England, his lifetime love of nature was nurtured by his father with walks through the Kentish woods noting plants, ground orchids and animals in the surrounds. The ‘bee-orchid’, Ophrys apifera was still a vivid memory to him.

His early education was in Kent followed by studies at the Folkestone Commercial College from 1936 until 1938. He joined the Royal Air Force in 1940, serving with No. 5 Group Bomber Command. He rose to the rank of Flight Lieutenant and personally received the ‘Distinguished Flying Medal’ from King George VI.

He completed 46 missions over enemy territory and on his final trip was shot down in flames over France. His life was saved by an ‘Irvin Parachute’ and he proudly displayed his exclusive members’ Caterpillar Club pin, only to be worn by persons who had saved their life by parachute. His had ‘red eyes’ as the parachute was on fire when he bailed out!

He was helped at a French farmhouse where he obtained civilian clothes and had his burns attended to. He was eventually captured whilst attempting to return to the English lines and spent the last few months of the war in Stalag Luft 1 as a prisoner of war.

In 1944 he married Jill Speight, an Australian girl, born in Windsor, New South Wales. In 1950 they, and their two eldest children, emigrated to North Narrabeen, NSW. Their second son Andrew was born in 1964.

The surrounding bushland re-awakened Walter’s enthusiasm for nature and he soon began identifying the local native orchids. He was an accomplished artist in both oils and charcoal, and he began developing his botanical art skills. He drew in minute dissected detail, and to scale, every native orchid he found. These drawings appeared in orchid journals worldwide and now reside in the Mitchell Wing of the NSW State Library.

He had many papers on Australian orchids published worldwide. He also corresponded with many leading orchid scientists and regularly lectured overseas.

In the early 1960s Walter, together with Bill Murdock, saw the need for a society to foster protect and conserve Australia’s native orchids. The Australasian Native Orchid Society (ANOS) was established on 6th July 1963 with Walter elected as the Foundation Honorary Secretary before a gathering of 90 members. He wrote the first constitution for this Society which now has ANOS sub-groups established across Australasia.

At this time he also formed the Warringah Group of ANOS and became its first President from 1964 to 1967. He stayed on the Committee until 1971 and was made Patron of this group. He also became a founding member of the ANOS Sydney Group and a sustaining member of North Shore Orchid Society Inc.

Walter’s commitment and enthusiasm was boundless. He attended the Judging School of the Orchid Society of NSW, in 1962-3 and became an accredited Orchid Judge. He became a member of the Publicity Committee of the 6th World Orchid Conference held in Sydney in 1969, where he also won the Champion Native Orchid of the Show.

He served on many committees, mostly as Chairman. In 1981 he chaired the Committee for the Orchid Symposium of the 13th International Botanical Congress and was also the Orchid Society of NSW delegate. For a short time he also served as Conservation Officer.

As one of the first and now experienced ANOS judges, other activities included establishing Native Orchid Judging Standards, training judges in Judging School, and undertaking workshops etc. for trainee judges and others. Walter also took an active part in the Committee for the first ANOS Conference and Show in Wollongong in 1990.

In 1987 he became an Editorial Associate for The Orchadian and together with Murray Corrigan was the Acting Editorial Committee for Volume 9, No. 1. This publication was completely re-designed with a new cover and general layout. Walter became Editor of The Orchadian from 1992 until 1996.

Walter was inherently drawn to the conservation of native orchids. He assisted in the formation of the Orchid Species Society of NSW and actively served on The Stony Range Flora Reserve project as Publicity Officer. He received this Society’s Meritorious Service Award in 1990.

He was awarded Life Membership of both ANOS and the ANOS Warringah Group.

In 1988 Walter was awarded the Australian Orchid Council’s Award of Honour for outstanding scientific service.

Walter’s interest in Australian native orchids led to he and Jill establishing an orchid nursery for both native and exotic orchids at Elanora Heights, NSW. The ‘Double U Orchids’ became a focal point for native orchid growers Australia wide, especially for their native orchid stock, and the new hybrids which were cultivated to a high standard.

This was a successful venture and it was some years later Walter and Jill moved with their nursery and collection to the Central Coast and subsequently retired to Bonnells Bay.

Walter authored three books, namely: Growing Orchids, published 1969; by Rigby Ltd, Dendrobium Orchids of Australia, 1989; published by Houghton Mifflin (Aust.), and Timber Press (USA), and Sarcochilus Orchids of Australia, 1992; published by Double U Orchids. He also participated in other orchid publications including the Dendrobium section of What Orchid is That? Edited by Dr Alec Pridgeon.

One of Walter’s last papers titled ‘’The Genus Dendrobium in Australia, its species and hybrids’’ was presented at the 13th World Orchid Conference in New Zealand in 1990.

He was always ready to serve and did so admirably. Be it committee work for many societies, editing The Orchadian for many years, establishing orchid judging guidelines and orchid judge training programs, and organising and planning orchid congresses and symposiums, he was exemplary.

Walter was energetic, personable and talented. He has left a legacy in his fine botanical drawings and photos, his quality native orchid hybrids and his contribution to the conservation of native orchids throughout Australia. These qualities were recognised by the Australian Orchid Foundation with its Award of Honour, 1998.

Walter received the Order of Australia Medal in the Queen’s Birthday honours list in 2007 for service to the conservation, cultivation and recognition of Australian native orchids.

A donation has been made to the Australian Orchid Trust Fund by ANOS Inc. Keperra Queensland. 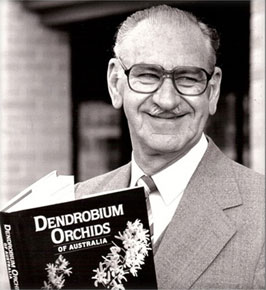