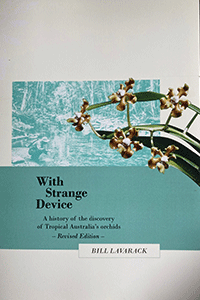 Orchid fanciers interested in the history of Australia’s orchids will be pleased to learn that Bill Lavarack’s book With Strange Device – a History of the discovery of Tropical Australia’s orchids has been revised. The revised edition of this book includes a list of all the orchids occurring north of the Tropic of Capricorn (283 species and a few varieties) with details of the first discovery by Europeans of each, starting with Joseph Banks on HMS Endeavour.  This list is, of itself, of scientific interest and is supported by a revised list of publications and a revised index.  The taxonomy is revised where appropriate

The original book was published in 2013 and has been out of print and unobtainable for several years.  Since publication of the first edition there have been some 16 newly recorded orchid species and a few new varieties recently discovered in tropical Australia.  Four new orchid explorers who have discovered and recorded these species are listed.  Leading these orchid explorers has been Bruce Gray of Atherton, well known to Australian orchid people, who has himself been busy finding and publishing new records and revising the taxonomy of several genera.

Twelve new colour photographs of rare species have been included, in some cases replacing images from the first edition and a new cover has been designed.